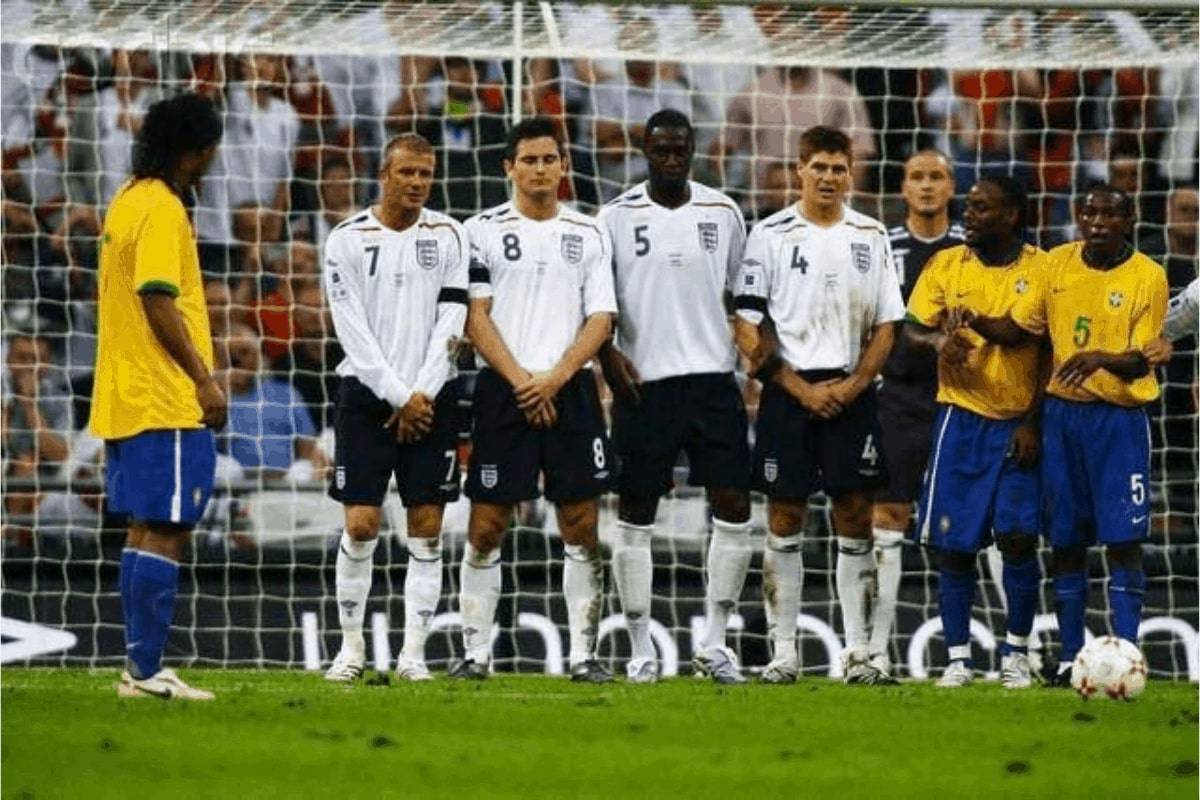 Taking free kicks has been one of the toughest tasks to execute on the football pitch.

It takes great confidence and pressure-observing talent to take a free kick and provide the team with a confident and unpredictable move.

We have seen many players failing while taking a free-kick in an intense situation but we have also seen some free-kick masters that hardly miss their target when ready to take the task once.

In this article, we have come up with the list of top-10 free-kick takers in the football industry.

When they are with the ball, the whole team counts on them and they also merely miss many of them.

We may miss out on some of your favorite players as this is only a detailed perspective of our research team.

The stats can vary a little bit but we are trying our best to provide the latest and updated stats in the business.

Roberto Carlos is a Brazilian footballer who makes his way to our list of all-time top-10 free-kick takers in the world.

He was popularly known as the most-offensive minded left-back player in the history of football.

After scoring 5 unbelievable free-kick goals in his career, he was mostly known for his curving free-kick with his trademark run that he executed from approx 8 m behind the ball.

He was surely the most reliable free-kick taker for his team.

Alessandro Del Piero is a former Italian soccer player who was known as a free-kick specialist.

He enjoyed a long and exciting career with Juventus where he held the record of scoring the most number of goals for the team (290).

He is the all-time 3rd highest free-kick goal scorer in Serie A history with 22 amazing goals.

He was the one who Juventus relied on when it came to take a free-kick and provide the team with a strong move.

Wesley Sneijder is one of the greatest Dutch footballers of all time.

He was awarded the UEFA midfielder of the season in 2010 all because of his unpredictable playmaking ability.

He enjoyed the major part of his football career with Real Madrid and Inter Milan where he added several titles to his wardrobe.

Despite now not having a fancy number of free-kick goals in his career, he ranks 8th in our list of top-10 free-kick takers just because of his assisting and crossing ability.

Steven Gerrard is an English player who enjoyed his long career captaining both Liverpool and the England teams.

He won a great number of titles for Liverpool as well as for the England team.

He was one of the finest and the most reliable central midfielder of his time.

With scoring 9 stunning free-kick goals, Gerrard is known for his playmaking and assisting ability.

He has made many critical assists and crosses that contributed greatly to the team’s success.

Cristiano Ronaldo is possibly the most highlighted name in the football industry nowadays.

Ronaldo is a Portuguese player who made his career playing for Real Madrid after having an inspiring career with the Manchester United campaign.

The current youth icon is playing for Juventus currently.

With his supreme talent and never-ending determination, Ronaldo has scored 66 free-kick goals in his career till now.

He is surely the one who is always ready to step up to provide the team with a prominent move with a free-kick.

Ronaldinho is a famous soccer star from Brazil who is known for his free-kick-taking ability.

Ronaldinho played most of his career for FC Barcelona and won many titles with the superior club as an attacking midfielder or a winger.

In his exciting football career, Ronaldinho has a total of 66 free-kick goals playing for the clubs and his national team.

He was the one that Barcelona mostly relied on when it was to take a free-kick no matter whether short-range or long-range.

Andrea Pirlo is an Italian footballer who ranks 4h on our list of the best free-kick takers in the world.

He has been a vital player for Juventus both as a player and the head coach in his career.

He is widely known for his deep playmaking and free-kick conversion ability.

In his long interesting career, Pirlo scored 35 stunning free-kick goals providing the team with a strong lead over the opposition.

He is the one he counts on when it comes to step up and execute a perfect free-kick.

Zico makes his way to third place on our list of the top-10 free-kick takers in the world.

Zico is a Brazilian football player who made his career scoring stunning goals and fouling the defense with his skills.

He is currently playing the role of a manager of different clubs that include the Indian football league team FC Goa.

The legendary footballer has a record of scoring 101 free-kick goals in his career.

He has scored a handsome number of 48 free-kick goals in his 71 appearances for his national team Brazil.

The second name on our list is David Beckham. He is a former English footballer.

He has been extremely good with his free-kick moves on the ground with the ball. With a goal-scoring rate every 1,198 minutes, he is currently the all-time 12th highest goal scorer through free-kicks in the Premier League.

David Beckham has scored a total of 65 stunning goals from free-kicks in his career throughout.

The very first name on our list of the top-10 free-kick takers in the football industry is Juninho Pernambucano.

He is a famous Brazilian football player well known as the name of the “The Free Kick God”.

He has surely been one of the top players for the team when it comes to step up and take the free-kick and provide the team with a prominent attack.

In his long 20 years career, he has scored a total of 77 goals defeating the fouling the opposition defense.

When we went through the stats of his previous League 1 side Lyon, we found that he scored 100 goals out of which 44 were off free kicks.