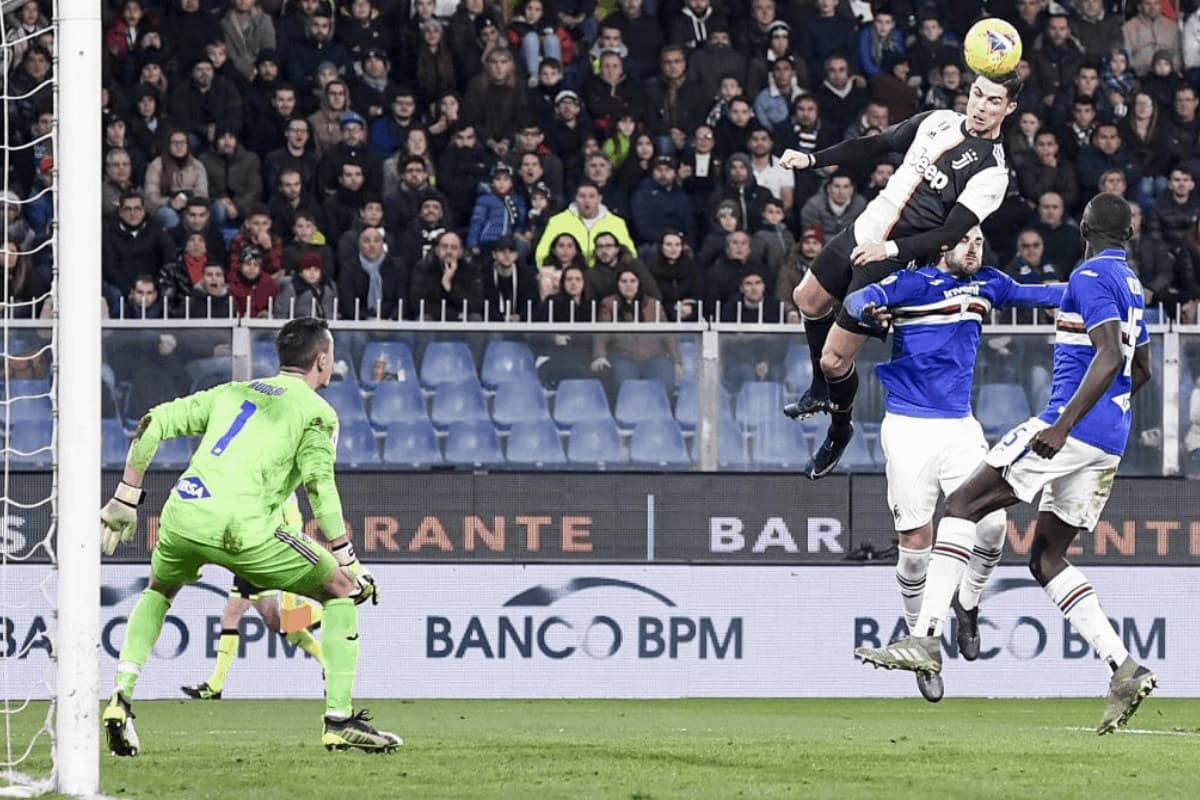 Cristiano Ronaldo, one of the best athletes that football sports and fans have ever witnessed.

Ronaldo is a Portugal player who has surely made his name playing for one of the best competitors in the game, Real Madrid, and now has transferred to Juventus the previous year.

Ronaldo has been known for his great agility, goal-scoring ability, game determination, and highly appreciable moves and high jumps.

He has scored a total of 740 goals and now is the highest goal scorer in the history of football after surpassing his fellow megastar Leo Messi who has 705 goals with him till now.

One major factor that separates Ronaldo from the other star players is his heading ability.

When we went through the stats, it was found that a great proportion of his goals came from headers and this clarifies the importance of the heading ability for Cristiano.

We have seen some unbelievable and superhuman headers from Ronaldo for the last decade and are glad to share the best we have collected for you.

We have gathered the top 5 greatest goals that Ronaldo has scored with his stunning headers and mentioned them in brief below.

The game ended with a 3-1 scoreboard where Ronaldo showed some exceptional sort of play and scored a goal defying the unsettled defense of Chelsea.

Ronaldo started a darting run that helped the Portuguese player to get into the defensive zone which was totally unaware and executed a fantastic and strong header that beat the goalkeeper and got into the goal net.

That was a great match for the fans instead of being just a friendly match.

4. Ronaldo turned the game with this header Vs Barcelona (2011)

At the third point, we are putting Ronaldo’s day-saving header which came in the final of Copa Del Rey against Barcelona in the year 2011.

The final was played between heat rivals Real Madrid and FC Barcelona in which both the teams were unable to score any goal till the end of normal playtime(which is 90 minutes+injury time).

In the game, Ronaldo got three golden chances to score a goal but the Barcelona defense was strong enough to defend them.

The decisive goal came in the first period of the extra time by none other than Cristiano Ronaldo who scored a high jumping header when his team fellow Angel Di Maria assisted him with a perfect cross.

This goal was one of the finest goals scored by Cristiano with the help of his beloved team fellow Angel Di Maria who will be missed by the youth icon for sure.

The situation was that if Manchester United defeated Roma, they would face Chelsea in the grand finals.

Talking of Ronaldo, he was in sensational form and had come with scoring 35 goals till then.

In the 39th of the game, there was a miscommunication or miss passing among the defensive players of Roma when Scholes lofted the ball into his own box, and in almost no time did Ronaldo appear and scored a perfect header out of nowhere and got a winning lead for the team. It was a sprinted header that was too quick for the Roma defense.

When the replay was played, Ronaldo was not even found in the frame when Scholes had lofted the ball and this shows a great display of agility by the current youth icon and leading goal scorer.

The world saw Ronaldo’s tremendous sort of action when Juventus faced Sampdoria in a Serie-A match.

The match was going on with 1-1 with lots of action in the first half.

It was the 45th minute of the game just before halftime when Ronaldo converted an appreciable cross into a goal with his giant leap heading the ball in the nets.

The best of Cristiano Ronaldo header goals surely has been his game-changing header against his former team Manchester United under controversial environments.

Real Madrid played against Manchester United in the champions league in 2013 February where Madrid had a quite bad start with Sergio Ramos striking an own goal in the second half just after halftime.

After missing a couple of shots at targets and scoring a goal with the free-kick rebound, Ronaldo and Di Maria kept on playing with the opponents’ defense and finally, Maria made another perfect cross that Ronaldo converted into a stunning header goal jumping quite higher than all the defensive players of Manchester United.

Some important facts about Cristiano Ronaldo

Cristiano Ronaldo was born on 5th February 1985 and belonged to a very poor family then. He had a family of 6 persons, 3 other children and his mother, and his father.

Ronaldo has surely sacrificed a lot of things and has done really hard work to reach where he is currently. Ronaldo has been showing his great skills and agility right from the start and is improving every single day.

He has won 33 trophies till now and is expected to surpass Dani Alves (42 trophies) in a short time.