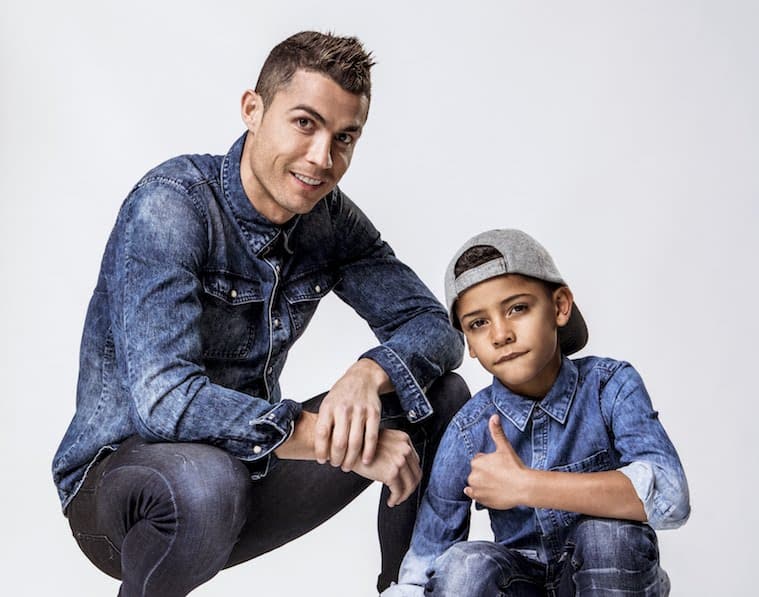 We all are keen to know about our favorite football player in detail.

They are the ones who keep the desire and feeling of excitement in our hearts alive with their super cool performance.

Football players put their bodies on the line just to make sure we don’t get bored watching their match.

And in return, we love them more than anything.

But are you a real fan if you only know about the football star you love? We don’t think you are.

We all are thankful to the players who put their best in every match but isn’t it fair that we should love the game more than we do to the players. We all should.

If you are a real football lover, you must be looking for the next superstars that may come and surprise everyone with their talent.

Yes! I am talking about the kids. These kids of football players might put their hands into the game and continue their father’s dreams.

But not only for their football career, but they are also in gossip because of their style and cuteness.

In this article, we have come up with the top 10 kids of football players you might see making a fantastic debut in football a few years after.

Please note that there is no certain rank for these kids and they all are up to the same mark.

All the kids mentioned here are because of their style, fashion, looks, and their future football career expectations.

The super cute baby of Gerard Pique is crashing social media with his cute smile.

Born in January 2013, the small baby is appealing to all hearts.

Gerard Pique has another child from his super hot wife, the world-famous model, Shakira.

With the name of his father, Sergio is making everyone feel so special when he smiles at them.

The world-famous football player is blessed with two more children, Sergio being the eldest.

The son of the famous soccer player, Neymar, is among the cutest child football players have.

With such a determined and boss-type name, Lucca, he is surely going to rule the family with her mischief activities.

Also, he has pretty blonde hair that adds up to her style.

Jeremiah McDonald is another baby kid who is in trend in the current time.

He is quite popular among people for her confetti sprinkling abilities.

He might be caught playing for her club or country in the future.

Makka Salah is the small and cute daughter of Mohammad Salah who has left a legendary remark in the Liverpool club.

The baby Salah has a very sweet smile that can be enough to make your day.

The daughter of one of the best forwards Barcelona has ever had.

Suarez has been a one-man army for the team in many situations, winning the game for his team.

A number of people ask what the reason behind his happiness is and smile, the most relatable answer is his super cute daughter, Delfina.

Who doesn’t know the legendary argentine who has given a new definition to the game? Messi is the second-highest goalscorer in the history of the game.

Apart from his soccer life, Messi surely has a sweet family who loves him more than anyone.

Messi has three sons from his wife Antonella. The eldest one is Thiago who is about 10 years old now.

Later on, Messi had another child whose name is Mateo.

Mateo was born on September 11 2015 which was a great year from Messi’s playing career point of view.

The super cute baby adds new happiness to Messi’s life and gives him the happiness of being a father.

3. Brooklyn, Romeo Cruz, and Harper (the sons of Beckham)

The sons of one of the greatest athletes football have ever seen, Beckham.

David Beckham has made his career in football keeping him on the list of one of the best players of his time.

He is currently the co-owner and president of the Inter Miami and Salford City clubs.

Beckham has four children, Brooklyn, Romeo, Cruz, and Harper. Brooklyn is the oldest among them.

All four kids look super cute and adorable from their appearance. Brooklyn was born on 4 March 1999 and is the eldest brother.

Following him is Romeo who was born on September 1st, 2002. The Beckham family got their third child on 20 February 2005 as Cruz David.

The youngest one in the family is Harper who is a 10-year kid now. Born on 10 July 2011, he is surely the cutest family member.

All the kids in the family are fashion-friendly and look super cool.

However, links are informing us that we might not see Beckham soccer in the future as the kids have some other plans in their minds.

The world is surely waiting for the next Rooney to come in the ground and control the game as he used to do.

Rooney was one of the most decorated midfield soccer players we have ever seen and we can expect the same from his super cute baby, Kai Rooney.

Don’t you want the next Cristiano Ronaldo playing for Portugal in the future? If yes, you might be wishing right.

The little Ronaldo is in the gossip nowadays because of his soccer skills and talent. Cristiano Ronaldo Jr. was born on June 17 2010 and he is with the Manchester United youth squad for training.

If he is as determined as his father is, there will be no time when we see both Ronaldo playing together.