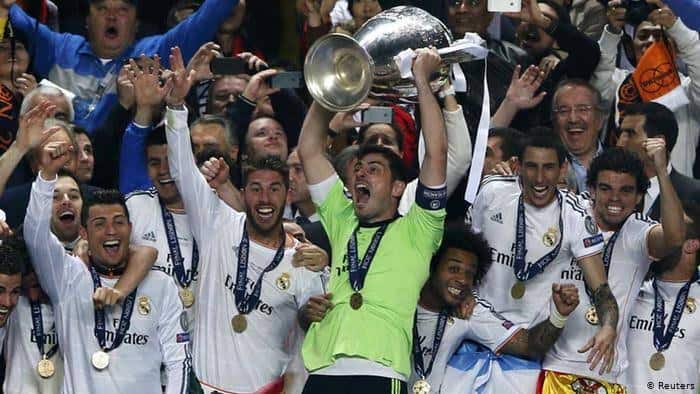 We see a number of players come and perform to their best not just to gain fame and popularity.

A real player is someone who puts his 100 percent effort into making his team win the game.

The more such players a team has, the more successful it becomes.

What makes a team win the title? The determination and hard work of its players make it a winning team.

Some teams have many match-winning players while some only have a few.

In the history of football, some teams have been dominant and some have shown consistent growth, and all is calculated by the number of titles they have won.

Below, we have listed the top 10 football clubs with the most trophies in ascending order, starting from the least.

All these teams are taken from the European league. Based on their overall title holds, these football clubs are ranked.

AC Milan is the only Serie A team to win titles in the European Leagues.

The team has shown consistent performance and has lifted a total of 48 titles to date.

They have won the second-highest number of matches in the history of European Football, just behind the Real Madrid side.

AC Milan has been crowned the champions of Europe seven times.

The first time they won the league titles was in 1963.

AC Milan was the only side to successfully defend the Euro Cup title before Real Madrid did the same in 2017.

On our list of top 10 football clubs with the most trophies, Liverpool also makes its way.

It is the second English team after Manchester United that has made its entry in our list of clubs with the most trophies.

Also, Liverpool is the most successful English team in the European league with winning the title a number of six times.

On the domestic level, they have 18 top-flight titles, seven FA titles, eight league titles which is a record, and a total of 15 charity shields.

Liverpool won its first Premier League titles in the 2019-20 seasons after a long wait of 30 years. Also, Liverpool has won the FIFA world cup in the year 2019.

Manchester United is said to be one of the most decorated clubs in the history of football with having so many great match-winning players on the side.

It has been the most dominant club in the Premier League and has shown consistent growth in the European Leagues.

The team holds a total of 66 trophies that include 20 top flight titles, 12 FA cups, five league cups, and a record of 21 charity shields.

Also, they won the champions title in 2017 that was their 4th league title of the European Leagues.

Manchester United is also the first club to win a global cup with the Intercontinental Cup in 1999. They also won the Club World Cup in 2008.

Juventus is the most successful and decorated Italian club in football history and also makes its way into the list of our top 10 football clubs with the most trophies.

Juventus has won a total of 70 titles that include 36 Serie A titles.

The team also holds a number of 14 Italian cups and 9 Italian super cups.

The consistent performance of the team can be observed with its achievements in the European Leagues.

The team, including some of the best players in the field, has managed to win two European Cups, three UEFA Cups, two UEFA super cups, and one Cup Winners Cup.

The side has been crowned the global champions twice with winning the intercontinental cup in 1985 and 1996.

It would be a surprise if we do not include any Dutch team in our list of top 10 football clubs with the most trophies.

The Dutch team that makes its name in the list is none other than AFC Ajax.

The side holds the record for winning the second-highest number of titles in the domestic level-35 times.

FC Porto comes in one of the best teams playing in Portugal.

It is the second most decorated team in Portugal with a total of 79 titles in history.

At the domestic level, they have won a total of 72 titles that include 29 league champions’ titles, 17 Taca de Portugal cups, 4 Campeonato de Portugal, and a record 22 Supertaca Candido de Oliveira.

FC Bayern Munich is a German team that holds a number of football records with it.

With a total of 80 trophies, the team holds the record of lifting the Bundesliga cup a total of 31 times and the German cup 20 times.

FC Bayern Munich has won every single league title of the European Leagues that include one cup winners’ cup and UEFA Cup, and two UEFA super cups.

SL Benfica has been the most decorated team in Portugal with 35 titles at the domestic level.

However, they have won the European cup two times in their history and that also came long years ago.

Benfica and FC Porto are two of the best sides that are known to produce talented young players who are going to make history later.

Real Madrid is known to have some of the best players in history.

Some names include Gareth Bale, Cristiano Ronaldo, and Marcelo.

It has won a total of 92 trophies in the history of European Leagues with winning the European Champions League 13 times.

The side won the UEFA champions league twice in a row in the 1980s and has won four UEFA super cups to date.

They have also crowned the global champions three times and the club world cup four times.

If you haven’t heard of the magic that FC Barcelona creates, it is hard to believe that you are a true football lover.

FC Barcelona comes among the most decorated football clubs in the history of football in every continent.

FC Barcelona is the best team if counted on the number of trophies won with lifting the trophy for a total of 95 times.

The team has won the European League and the champions’ league five times.

Also, they have won the cup four times. Three old fairs cup, and five UEFA super cups. Barcelona has been crowned the champions of Spain 26 times and has won the Spanish cup 31 times.

They are the only team to win six titles in a single year and the world title three times.