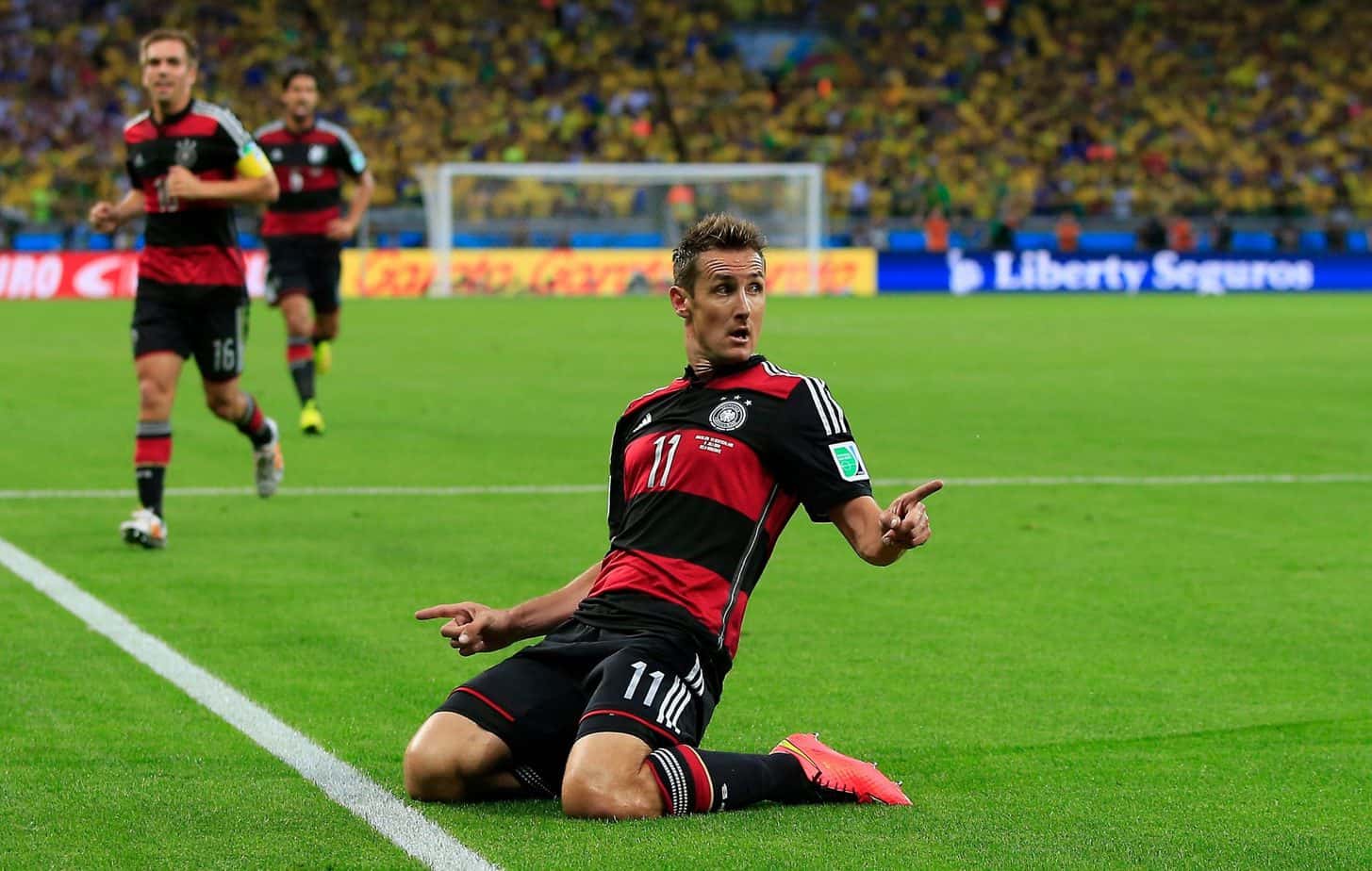 Fifa is one of the biggest tournaments in football. Frankly speaking, it’s more a sports festival than a tournament.

In this tournament, every player steps on the ground with the goal of doing something special for their country.

And some of those players make their dream come true by winning the FIFA world cup for their nation.

In this race, the best of the best players come head to head to show their talent.

We all say that a single player cannot win you a tournament, but that single player, if talented enough, can win you multiple matches that will win you the tournament.

In this article, we have come up with some of the best strikers the football world ever had on the basis of the total goals scored in the FIFA.

Here are the top 10 all-time highest goals scorers in the FIFA World Cup. And you know what the best part about this list is? It might include your favorite players.

Starting our list with the 10th highest goal scorer in the FIFA world cups, we have the name of Gabriel Batistuta.

Gabriel is a former Argentine professional player who has contributed a lot to the country in his own ways.

This legendary striker of the ball has played 12 games in the FIFA world cup and has scored 10 magnificent goals.

The ultimate contribution of these icons has not been matched yet and is hardly possible to be.

For all his class and temperament, we have only one word to say, We love you.

On our list of the top scorers in the FIFA world cup, we have Gary Lineker boasting his 10 supreme goals in the tournament.

Gary is a world-class former English player who is regarded as one of the best strikers of the ball England ever had.

Starting his football career in 1978 with Leicester City, Gary Lineker came all the way up and scored 10 amazing goals in just 12 matches.

He just played 2 FIFA world cups held in 1986 and 1990 respectively and that is what ranks him higher our list.

Gary is currently the only player who has been the top scorer in England with three different clubs; Leicester City, Everton, and Tottenham Hotspur. He is a real legend!

Helmut Rahn makes his way to the 8th rank on our list of the top 10 goal scorers in the FIFA world cup.

Rahn is a well-known German player who took that legendary winning shot in the FIFA world cup in 1954 against Hungary.

That was one of those 10 special goals that Rahn had scored in his 12 games in the two seasons of the tournament.

Sadly, the legend left us in 2003 but he is still there, right in our hearts!

Next, Jurgen Klinsmann appears as the 7th highest goal scorer in the history of the FIFA world cup.

Jurgen is a German soccer player who had played both for West Germany and Germany after the unification.

In his 17 games in the world cup, he scored 11 and that is still a lot for tons of players.

If you want to experience the quality of football Hungary plays, watch Sandor Kocsis.

This legendary Hungarian striker was quite hard to surpass by any player in his era.

Kocsis’ dominance was easily seen in the FIFA world cups with his 11 stunning goals out of the 5 matches he played in a single season.

Kocsis was one of those key players that led Hungary to the FIFA world cup final in 1954.

If you don’t know who Pele is, you are mostly a recent football fan. During the 1960s and the 1970s, it was Pele who lived in every football fan’s heart.

This Brazilian footballer is considered among the greatest strikers of the ball of all time and was regarded as the greatest by FIFA.

Pele used to dominate the FIFA world cups by scoring 12 world-class goals in his 14 matches.

In 2000, Pele was awarded with the World Player of the Century by the International Federation of Football History and Statistics. And he deserved every bit of that!

Just Fontaine is the name of that prolific striker of the game who smashed 13 superhuman goals in six matches of a single season in the biggest tournament football industry ever had, the FIFA world cup.

The retired French footballer was a treat to watch in his times.

As Pele said, he was one of the best 125 football players living on the earth.

Fontaine executed the impossible in 1958 when he scored 13 goals in mere six games in a single season. Just was just amazing, haha!

Making his way as the third highest goal scorer in the history of the FIFA world cup, Gerd was something else.

The German professional player was known for his clean finishing, both in and outside the box.

And with this supreme skill, he scored 14 match changing goals in the FIFA world cup where he played 13 games.

Playing for West Germany, Gerd was one who took the responsibility and took his team to new heights.

Also, guess who is the highest scorer in the Bundesliga? It’s none other than Gerd Muller.

We often talk about the 1st but forget the 2nd. But not this time, here we present the second highest goal score in the FIFA world cup history, Ronaldo Luis Nazario De Lima.

Ronaldo is a popular Brazilian businessman and a retired football player. He was undoubtedly one of the best strikers of the ball during his time.

Being a multi-functional striker, Ronaldo changed the way the game was played.

Scoring 15 out of his 16 FIFA world cup games, Ronaldo was just one goal away from being the highest goal scorer of all time.

And here comes the best, the highest goal scorer of FIFA in history, Miroslav Klose.

Klose is a German forward player who made himself the record holder for scoring the most number of goals in the FIFA world cups.

In the 24 games he played, Klose scored 16 mesmerizing goals that helped his team lift up the trophy in 2014.

It seems quite difficult for any other player to match or surpass Miroslavs record for scoring most goals in the FIFA. But football is full of uncertainty and anything can happen!

I love watching football and assume you do that too.

Watching amazing goals being scored is another level of experience you can never narrate. It’s just something else.

Aforementioned are the top 10 football players of all time who made us experience that joy for so many times by scoring some amazing goals.