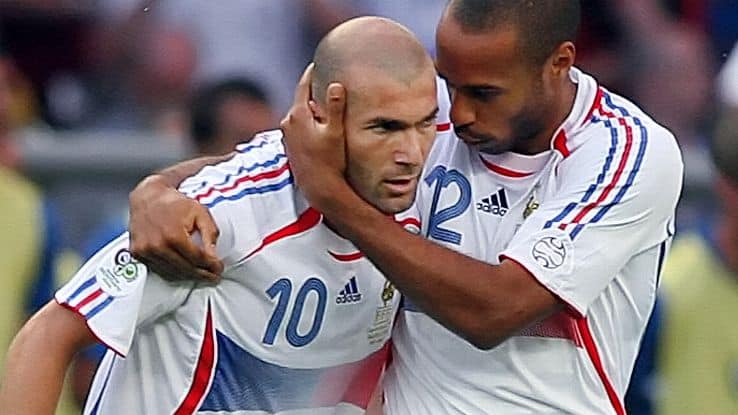 In honor of France’s World Cup victory, we’re counting down the top 12 greatest French soccer players of all time.

From Zinedine Zidane to Michel Platini, these legends have left their mark on the beautiful game.

The list is entirely subjective and yours may differ.

Kylian Mbappe is a French professional soccer player who plays as a forward for Paris Saint-Germain and the French national team.

Mbappe began his career with Ligue 1 club AS Monaco, where he made his professional debut in 2015. He then signed with PSG in 2017.

Mbappe is one of the top soccer players in the world.

He has been named the French Player of the Year and was included in the 2018 FIFA World Cup Team.

In the 2018 FIFA World Cup in Russia, Kylian Mbappé proved himself to be one of the best soccer players in the world.

The 19-year-old Frenchman scored four goals and had one assist in the tournament, helping lead his country to their second ever World Cup victory.

Mbappé is incredibly fast and skilled with the ball at his feet, making him a nightmare for defenses.

His performance in the World Cup has cemented his place as one of the top French soccer players of all time.

Karim Benzema is a French professional soccer player who has played for some of the biggest clubs in the world, including Real Madrid and Olympique Lyon.

He is currently considered one of the best strikers in the world, and has been nominated for multiple individual awards throughout his career.

Born in Lyon, France, Benzema started his career with local club Olympique Lyon at the age of eight.

He quickly progressed through the ranks and made his professional debut for Lyon at just 18 years old.

His performances attracted attention from some of Europe’s biggest clubs, and he eventually signed with Real Madrid for a reported fee of €35 million in 2009.

Lilian Thuram is a retired French soccer player who is widely regarded as one of the greatest french players of all time.

He played for several top clubs during his career, including Juventus and Barcelona, and was a member of the French national team that won the 1998 FIFA World Cup and 2000 UEFA European Championship.

A versatile defender, Thuram was capable of playing both as a centre-back and as a full-back.

He was known for his pace, athleticism, and power, as well as his ability to read the game and make last-ditch tackles.

He was also an excellent passer of the ball and had a knack for scoring goals from set-piece situations.

Thuram retired from professional soccer in 2008 after an illustrious career in which he won numerous trophies and individual accolades.

Patrick Vieira is a French soccer legend who played for several top clubs during his career, including Arsenal, Juventus, and Inter Milan.

He was a world-class midfielder who was known for his physicality, tactical awareness, and passing ability. Vieira won numerous trophies during his career, including three Premier League titles, four FA Cups, and a World Cup.

He is widely regarded as one of the greatest French soccer players of all time.

Franck Ribery is one of the top 12 French soccer players of all time.

He has played for some of the biggest clubs in the world, including Bayern Munich.

Ribery is a gifted player with superb dribbling skills and an amazing ability to find the back of the net.

He has won numerous trophies, including the Champions League and Bundesliga title.

Ribery is a true legend of the game and will go down as one of the greatest players to ever come from France.

There’s no question that Eric Cantona is one of the all-time greats when it comes to French soccer.

A member of the legendary Class of ‘92 at Manchester United, Cantona is a true icon who helped lead the Red Devils to four Premier League titles and two FA Cup triumphs during his five seasons at Old Trafford.

A mercurial talent with an often combustible personality, Cantona was nonetheless a supremely gifted player who could change the course of a game with a single moment of magic.

For many United fans, he remains the club’s greatest ever player.

Jean-Pierre Papin is a retired French professional footballer who played as a forward.

Papin scored 30 goals in 54 appearances for the France national team.

Papin began his career with club side Olympique Marseille, where he won several domestic and European honours, including the UEFA Champions League in 1993.

He then had spells with German club Bayern Munich, English side Chelsea, and Italian club AC Milan before returning to France to finish his career with Lyon.

At Marseille, Papin was the leading goal scorer for four consecutive seasons.

In total, he scored 143 goals in 218 appearances for Marseille.

Just Fontaine is a French former soccer player who is best known for holding the record for the most goals scored in a single World Cup.

He accomplished this feat in the 1958 World Cup, scoring 13 goals in six games.

Fontaine began his professional career with the French club Reims in 1953.

He was part of the team that won the 1956 French championship and reached the final of the European Cup the following year.

In 1958, he was the leading scorer in France’s Ligue 1 and helped Reims reach the European Cup final again.

That same year, he led France to a third-place finish in the World Cup, scoring 13 goals in six games, including four goals in a semifinal match against West Germany.

Fontaine retired from soccer in 1962 due to injuries.

Raymond Kopa is a French former soccer player who was an important part of the French national team in the 1950s.

He was a member of the team that won France’s first World Cup in 1958.

After his playing career ended, Kopa became a successful businessman.

Thierry Henry is the all-time leading scorer for the French national team.

Henry began his career with Monaco in 1994 before being signed by Arsene Wenger to play for Arsenal in 1999.

Henry is considered one of the best strikers of his generation and among the greatest players ever.

He has been described as “quick, strong, agile, skilled and prolific”.

His ability to change direction quickly and accurately make him difficult to defend against.

Michel Platini is a former French soccer player who is widely regarded as one of the greatest players of all time.

He played for several clubs during his career, including Juventus and Nancy, and was a member of the French national team that won the 1984 European Championship.

Platini also had a successful coaching career, leading the French national team to the final of the 2006 World Cup.

He was later banned from soccer for four years due to corruption charges.

Zinedine Zidane is a French former professional soccer player who played as an attacking midfielder.

Football fans consider him one of the greatest players of all time.

He was a member of the French national team that won the 1998 FIFA World Cup and 2000 UEFA European Championship.

Zidane was born and raised in Marseille, France, to Algerian parents.

He began his career with Cannes in 1989 before moving to Bordeaux in 1992.

Zidane joined Juventus for a world record fee of €73 million in 1996.

After winning two Serie A titles with Juventus, he moved to Real Madrid for a world record fee of €77.5 million in 2001.

In conclusion, these are the top 12 French soccer players of all time.

This list was compiled based on their skill, athleticism, and contribution to the game.

These players have inspired others to pursue a career in soccer and have left a lasting legacy on the sport.