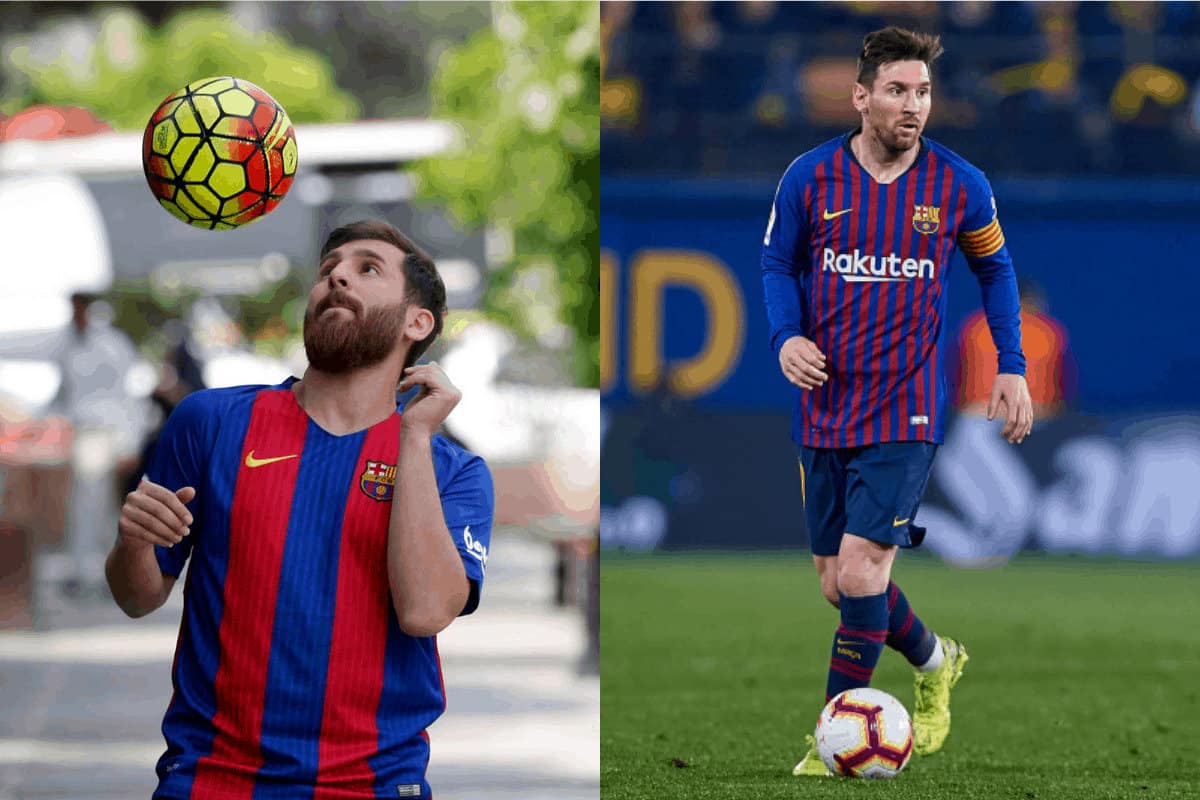 The world is full of wonders and it is said that every person has at least one person who exactly looks like he is and it’s been quite true in several incidents with your favorite soccer players.

Naturally, or sometimes, artificially done with the help of surgeries and operations, fans have found to match their favorite one’s appearance and look.

However, it sometimes creates a problem for both the soccer stars and their fans due to the massive miscommunication or misunderstanding.

In this article, we have come up with the name and some details of the persons who look exactly the same as your favorite soccer star and might surprise you with their appearance.

There are more than half a dozen of persons who claim to look exactly like the famous forward of FC Barcelona and Argentina who is worldwide popular and is known for his super-fast drills and dibbles.

We have found out the top 3 men looking like the star Barcelona player.

One of Messi’s Iranian fans would have found it really hard that he now looks exactly or even more handsome than the Argentine star.

Though, this has turned out to be a great cause of worry for Leo as his duplicate had been accused of using his hairstyling to seduce 23 women and has now finally been arrested by the police to give proper punishment.

The second look-alike of Messi has been using his appearance as a gift to entertain the children being raised at orphanages in the city of Zagazig.

He is a nice and humble person who really treats others with humility and politeness and just uses his gift to help and make the children happy.

Yeah, sure, looking at the American Messi and the original FC Barcelona star at the same time, it would be quite hard to tell who the look is like.’

The man is also known as the Rapidly Growing Messi and surely gives the most precise personality of the Argentine legend.’

Yes, your favorite Cristiano Ronaldo also has a few looks alike who have found themselves to be enjoying their special gift. One of the well-known look-alikes of Ronaldo is named Saki.

Not only with appearance but the look-alike is also able to play a good kind of football and even plays international football as a freestyler.

Talking of Saki, he is a great follower of CR-7 and follows his idle in every possible way from equipping his appearance to learning his new tricks and techniques.

He is a Greek boy by birth and was named Athanassios Kotsabassidis when he wore it at Frankfurt am Main.

He had a keen interest in sports and entertainment from the very start of his life.

It’ll be unfair if we don’t talk about his sporting skills.

He has some magic when the ball is with his feet and has put on a great display of art several times that also makes us remember the legendary Portuguese star, Cristiano Ronaldo.

The next story on our list is of the great soccer player Mesut Ozil and his look-alike Enzo Ferrari.

Enzo Ferrari was also a famous personality being an Italian motor racing driver and entrepreneur.

Enzo Ferrari was even the founder of the Scuderia Ferrari Grand Prix motor racing team.

His birth was in February 1898 and eventually, he died the same year Mesut Ozil was born which is 1988.

So it won’t sound odd if you call Mesut Ozil a lookalike of Enzo Ferrari.

Neymar is another soccer player who is just counted in the list of legends and is surely worth it and we can say this by looking at his performances in the past years and the current season.

He does also not sort of his fans who try hard to get his appearance and some of them are successful in doing so and are enjoying some part of Neymar’s fame.

One such Neymar fan is Ruben who looks exactly like a carbon copy of the Brazilian star and is enjoying a good amount of fun and fame just by having the looks of his idol.

He is a current citizen of the London city and has now got in touch with his all-time inspiration and idol, Neymar.

Mohammad Salah is a world-class footballer who has been contributing to the success of Liverpool for decades.

He also does not sort of his fans and supporters around the world who try to be like Salah in different ways.

One of them is Ahmed Bahaa who is surely a carbon copy of his idle Mohammad Salah.

Bahaa is an electronic engineer who works in Cairo.

Talking of Salah, he was being mistaken for sometimes because of his strong similarity to the Liverpool star and has also appeared in a number of ad campaigns in the place of his favorite star.